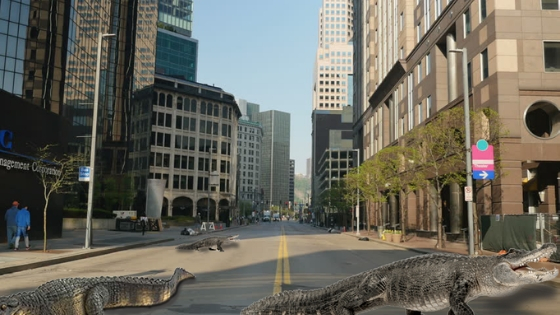 Pittsburgh, PA, April 1, 2019 – Children in the Pittsburgh area are in for a surprise today. In celebration of opening their 81st location just last month Snapology, the Pittsburgh based STEM education franchise, is giving away gift certificates, building sets and other prizes to lucky children who find, wrangle and return one of 81 full grown alligators released this morning in the Pittsburgh area.

The contest began at 8:00 am and will conclude at midnight tonight. The full-grown gators, each weighing between 300-400 pounds, have been released all over the Pittsburgh metro area. Each gator will be wearing an orange Snapology t-shirt so that kids don’t get confused and try to return other gators that may be walking the streets.  Gators should be returned to Snapology headquarters at 1350 Old Pond Road, Bridgeville.

“We are so excited to see the creative ways children trap and transport the alligators,” said Laura Coe, Co- Founder and CEO of Snapology. “There is no right way to wrangle a gator, we are looking for innovative ideas. We also encourage kids to work together and have fun in the process, after all that is Snapology is all about!”

The promotion is inspired by the company’s ‘Sebastian Gator’ mascot and has been in the works for years. Co-Founder Lisa Coe made the decision to start raising gators for the contest after having experienced the exhilaration of wrestling a gator while opening Snapology’s Sydney Australia location.  As the company grew, so did the congregation of alligators. After moving Snapology Headquarters from Bethel Park to a new and larger location in Bridgeville in 2018, the company saw an opportunity to create a complete gator habitat on their grounds to fully realize their vision.

When the 81st gator reached full maturity at nearly the exact time they opened their 81st Snapology location, the decision to launch the contest was a natural one.

The exact timing of the release was carefully planned. “We wanted the gators to be active, really making it a challenge for the kids. After they eat they tend to get sleepy, so we have not fed them for the last few weeks,” said Kelly Carpenter, Outreach Manager. The gators showed just enough spirit early this morning to ensure the contest would be fierce.

Children who return the gators by midnight tonight will win a special “Sebastian Gator” building set, a Snapology pencil or a sticker depending on the order in which they return the gators.